An early picture of Scoter on a postcard 1907 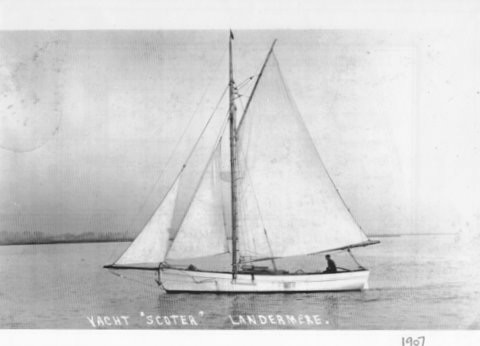 Scoter and the Wildfowler

La Chapelle owned Scoter for some years, probably during WW1, one of 10 previous owners from 1895, before she was acquired by Colin Grierson. However he has a fascinating history and I have reproduced some of the text from J Wentworth Day’s book Coastal Adventures below this autobiographical summary.

La Chapelle,&nbsp; Victor Octave Xavier Alfred de Morton&nbsp; de, Count de La Chapelle in the French nobility&nbsp; (1863-1931), lawyer and wildfowler, was born in Perigord, France, in 1863, son of the Count and Countess de La Chapelle. His mother was descended from the Scottish earls of Morton. The first eight years of his life were spent on the family’s extensive estates, comprising the Chateau de Montcuque in the region of Perigord and the Chateau Giomer on the edge of the marshes of St Valery-sur-Somme. Following the abdication of Napoleon III in 1871, his father’s estates were confiscated and the family moved initially to Italy. There he developed his lifelong love of wildfowling, using a 28 bore shotgun. His inherited wealth enabled him to attend shooting forays in Italy, France, England, and North America (Dakota territory), where he worked for a time among the Sioux Indians.

La Chapelle settled in London, and was admitted a solicitor in 1888. He founded a firm of solicitors in Gresham Street in the City of London, which handled many important cases and boasted foreign links with Paris, Geneva, Brussels, Berlin, Alexandria, Florence, Bucharest, Melbourne, and New York. He was legal councillor to the royal Romanian litigation, which played a part in persuading Romania to enter the First World War on the side of the allies in August 1916. From 1907 La Chapelle spent weekends and holidays with his family-he had a wife, Rachel (1875-1970), and a daughter-at Tollesbury, Essex. He was a keen punt-gunner, famed for his adventures with his two boats, which toured the Essex Blackwater estuary. He acquired an extensive collection of guns and other shooting memorabilia which were retained at his residence, Heron Lodge. His reputation among the local inhabitants was enhanced by his unwillingness to shoot wildlife on many of the mudflats vital to their living, confining his wildfowling to the adjacent coastal stretches. His exploits were extensively documented by friend, fellow shooter, and journalist James Wentworth Day.</p>

The Count (La Chapelle was known by his French title) was a popular figure, who privately funded a London jazz band which he personally conducted. In the late 1920s his legal practice suffered from misappropriations by a trusted member of staff. La Chapelle suffered a nervous breakdown. After returning to work after a period of recuperation, he was found dead with a bullet wound to his head and a revolver by his side, in his office at 34-6 Gresham Street, London, on 9 June 1931. His funeral, held in Tollesbury, was attended by representatives of the Wildfowlers’ Association (which he had co-founded) and the royal Romanian litigation. Respected as the ‘king of the Blackwater punters’, he was buried on 13 June at the West Street burial-ground, Tollesbury, with ‘his face to the sea, his feet to the marshes, Sea Lavender in his grave, the sea wind blowing above him’&nbsp; (The Field, 20 June 1931, 898).

I have copied the following extract from J Wentworth Day’s book Coastal Adventure; in the book it runs to several pages and is well worth reading, as is the whole book.

Xavier Victor Octave de Morton, Count de la Chapelle was a man from another age, a more coloured century. Born in 1863 … he was one of those rare men to whom life is a constant gallant adventure. He made friends for life when he made them at all. and his choice, usually, was for those who appealed to his own nature, a dashing Gascon temperament that had no use for men who avoided risk, who have not lived dangerously.

For thirty-five years he lived a great deal at Tollesbury, where he owned and partly built a shooting-box known as Heron Lodge, surrounded by beautiful gardens. Here he kept his wonderful collections of weapons, armour, prehistoric and Napoleonic relics, and stuffed birds – all rare Essex specimens. Fortunately, most of his collection is now preserved in my own small museum. Many of his weapons and flint implements are in Colchester Museum.

…….. He began at the age of twelve with a pinfire twenty-bore gun, under the tutelage of an old fowler named Boyard, and a punt-gunner named Lamidel. Boyard taught him to shoot snipe on the fens of the Somme, to kill larks over a ‘twirler’, to bring down hawks and owls to a Grand Duc Articule, to decoy duck and to shoot them on the ‘Huttier’ system. From Lamidel he learned amid the sandbanks and dangerous shallows of the Baie de la Somme, the management of small boats in the short tides and choppy waters, the working of a punt and gun, the art of digging in on the tide-line, and shooting over decoys.

…..  wildfowling and yachting were his principal sports. He was founder and vice-president of the Wildfowlers’ Association, owned a gunning yacht for thirty-five years and skippered her himself. He was no fair-weather yachtsman. His twenty-ton SCOTER, or the five-ton Teal, were known all up the coast, from Orford Ness to the Maplin sands, and they were oftener at sea in winter than in summer.

Scoter in Cornwall before she collapsed whilst being moved into a shed for restoration and was eventually burnt. I believe that the Transom had already been rebuilt by then [not in these pics]. 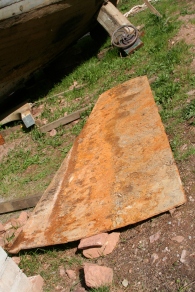 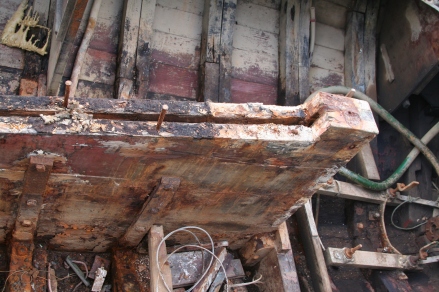 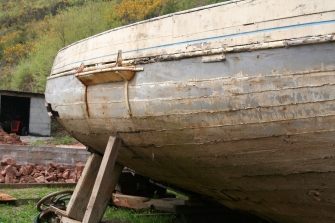 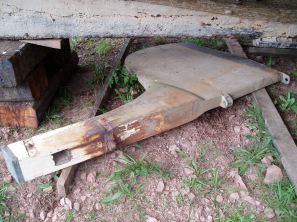 Scoter and the Artist

By Doug Grierson, his son.

My father bought Scoter in 1930 and kept her at Leigh on Sea until moving to Scotland in 1937. He and Maurice Griffiths met during the WW2 and remained friends thereafter. I understand many of MGís shoal draft designs were based on his observations of Scoter since 1919.

My father had to do a major rebuild after WW2 as the boat had been left on the beach at Broughty Ferry for almost 6 years. She was in commision again from 1948. I took her over in 1971 following my fatherís death, and sailed her until I sold her in good seaworthy condition in 1998 to David Head who moved her to Plymouth. The pictures show her in a sorry state – what a shame.

I remember (as a small boy) that there were two metal fittings – one port, one starboard – on the coachroof about 3 feet behind the mast. Before my time, there was a big open cockpit, about half of the length of the current open space between the mast-step and the steering well. I was told these fittings were where the cannons had been mounted (and presumably operated from the cockpit). The whole coachroof was replaced around 1960. I don’t think the actual guns were there when my father bought the boat.

A close friend of the family, Brian Kelley, commissioned Idle Duck to be built by Millers of St Monans in 1968 to a design by MG using Scoter’s lines. He sold her in 1987. I last saw her in Burnham on Crouch about 10 years ago.

Scoter when she was owned by Colin Grierson from 1930. She was kept in Tayport and regularly sailed across the North Sea to Norway. See his page… 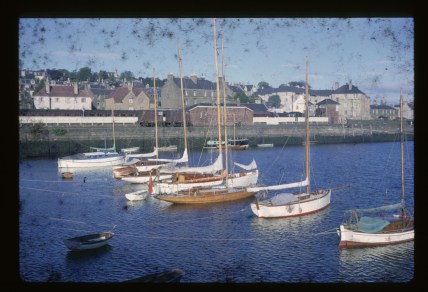 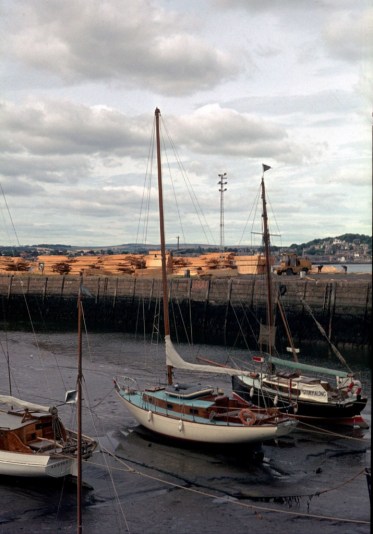 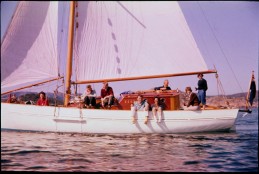 Scoter in Plymouth, under threat of being burnt, for sale, and eventually being sailed to a yard on the Lynher 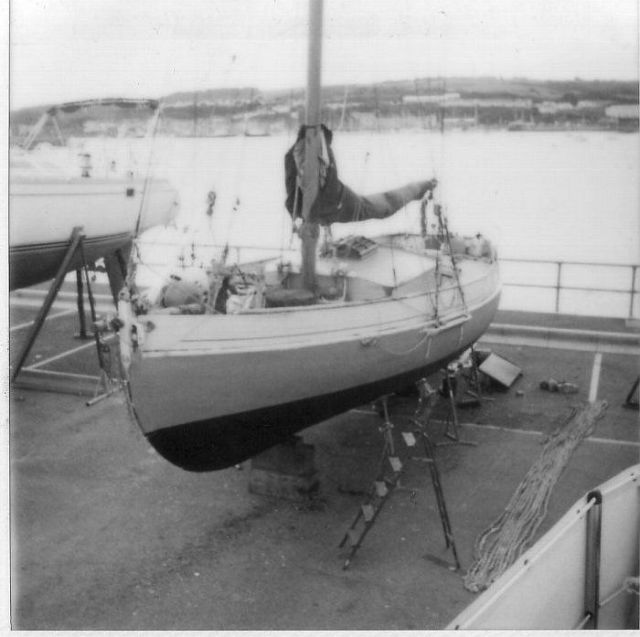