James Miller, the Shipyard, no longer exists but had a successful history of building working and fishing vessels and also many private motor and sailing yachts, including the well known Miller-Fifers, the MFV derived motor sailor,

Below is a short history of Millers, taken from Wikipedia, and written by John Cunningham, a relative of the family. Also below there is Peter Gregson’s article on the Miller Fifer written for Classic Boat but reproduced here with his permission.

In 1779, David Miller came to St Monans. The Miller family had been in the building business since 1745, when John Miller started a business of wheelwright and joiner at Overkellie. The business moved to St Andrews in 1768. At that time, 1779, St Monans had quite a large fleet of fishing vessels, the burgh was growing and was in a flourishing condition. There was no proper harbour only a jetty built of stones, where the middle pier now stands, and probably the first boats to be built by Miller were of the ‘beaching’ type. i.e. the boats were pulled up on to the beach when not in use. These boats were very primitive in comparison to the present day fishing boats. They varied in length from 16 to 40 feet and had a shallow draft. They were open, single masted and a lug sail and oars were the means of propulsion.

Miller developed from this type of boat to the modern fishing vessel, latterly made of steel, with all the modern technological aids to fishing and safety, with a modicum of comfort for the crew. Up to 1888, the business was purely a local concern, building for St Monans and the neighbouring ports of Pittenweem and Anstruther. My late grandfather, James Thomson Niven Miller took over the business and he soon began to extend and develop it further, opening a second yard in Anstruther where he built many of the larger, 50 to 80 feet, ‘Fifie’ type fishing boats .

With the advent of the steam engine, he immediately began building the larger steam trawlers and steam drifters, fitted with compound steam engines. He diversified the business further, by building cargo boats, launches, fishery inspection vessels and then yachts. The first yacht was steam driven with a clipper bow and an overhanging stern.

From then on the name of Miller became famous world wide for the quality and craftsmanship of the vessels they built, from the smallest dinghy to the largest yacht. Again, in the early days of experimenting with the internal combustion engine, J.T.N.Miller was at the forefront, being one of the first in the installation of a diesel two-stroke engine in a 62 ft. Fifie fishing boat.

It was in 1908 when a 40 ft. yacht was built and fitted with a four cylinder Kelvin paraffin engine, the simplicity and efficiency of the engine appealed to my grandfather and he immediately became an agent for Kelvin engines, an agency which lasted for the lifetime of the business. During the two World Wars, Millers played their part in providing the Royal Navy with the type of vessels that could be constructed in a comparatively small, local yard. Motor launches for use in the Near East were built during World War I, while during and immediately after World War II, a total of 59 vessels, Motor Torpedo Boats and Motor Launches, were built.

Between the wars, fishing boats continued to be built, but it was at that time that yacht building came into its own. From 1920 to 1939, 66 yachts were built, covering sail. auxiliary and motor types. Many were to Miller’s own design but some were designed by such well known naval architects as G.L.Watson, W.G.McBryde and others. Of particular interest was the motor yacht Bluebird, built in 1932 For Sir Malcolm Campbell. 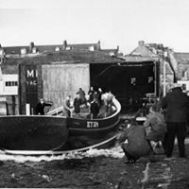 After the second World War, a whole new fishing fleet was built for various parts of the country and also several large, luxurious yachts. Then, in 1957, Jimmy (q.v), James’s grandson, designed the ‘Fifer’ yachts , on fishing boat lines and the first one. a 31 footer “Royal Fifer”, was taken to the 1958 Boat Show at Olympia and was sold on preview day. 110 Fifer yachts in all were built up to 1969, the largest being 45 feet. Several made Round the World trips. Peter Gregson of Wooden Ships describes the Miller Fifers as the Thomas the Tank Engines of the Seas. See article below

My uncle Tom served his time as a boatbuilder and became an expert in the design and building of craft of all kinds. One fault, if it was a fault, was that he carried all the ins and outs of boatbuilding and the layout of the yard in his head, even down to where any particular item was. There was no organised store in those days. Overhead costs were low.

Uncle Willie, a bit younger than Tom, served his time as an engineer with the Bergius company in Glasgow, the suppliers of Kelvin engines aforementioned. A motor driven capstan was designed and developed by Willie. It was patented and named ‘Fifer’, it was assembled in an enlarged engineer’s shop, where formerly, smaller boats had been built.

Jimmy, Tom’s son, served his time in the boatyard, studied naval architecture, and was responsible for designing most, if not all of the fishing boats that were built after WW II. He was so keen that when his new house was built, a drawing office was built alongside it.

Jim, Willie’s son, was sent off to Bergius in Glasgow, like his father before him, to serve his time as an engineer. I think he did this under protest, as he had a fine voice and his interest seemed to be music and not engineering nor boatbuilding. However serve his time he did, but never really took an active part in the fortunes of the boatyard, but became known as the singer, Niven Miller, of Scottish and Classical songs.

On uncle Tom’s death, his son Jimmy, who was well qualified, took his father’s place in the business and his youngest sister, Jessie worked in the office and became Company Secretary. The business continued to flourish. As time went by neither Jimmy nor his cousin Jim managed to produce any male offspring. Willie had left the business, with great reluctance, because of illness, and eventually went off to New Zealand to live with his daughter Jenny. Jimmy and his sister Jessie carried on, but it was seen, regretfully, that there was no chance of the business being carried on by a Miller. It was the end of the line. 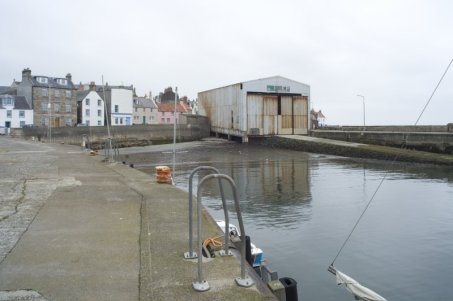 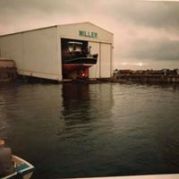 In 1972, Geo. Moodie, Port Seton, approached Jimmy about the construction of a steel fishing boat. (A complete change from building wooden vessels). However, Jimmy designed one, and approached Jas. McBurney of McTay Marine, for whom two Fifer yachts had been built, to ascertain if they (McTay) would be interested in constructing the steel hull. They were. Millers fitted the hull with an engine and steering gear and it was brought to St Monans for fitting out.. This was followed by the ‘Ocean Herald ‘ for John McBain of Pittenweem , and another designed by Jimmy, a 76 footer, in steel, for Robt. Clark of North Berwick, followed by the ‘Ocean Triumph’ another 76 footer for Ian Murray of Anstruther.

It was then, in 1976, that the company was taken over by McTay Marine a company which was a member of the Mowlem group, Jimmy and Jessie continued to manage it for a while , but after Jimmy retired, things began to change. McTay (the company was still called Jas. N. Miller & Sons Ltd.) changed entirely to the use of steel in the construction of the fishing boats.

Gone were the days of my childhood in the 20s and 30s, when the smell of sawdust and shavings pervaded the air. No longer were steaming planks rushed from the steam box to be moulded on to the wooden frames of a fishing boat. No longer would there be the chipping away at a timber or planking with an ‘each’ (adze), nor the sound of oakum being caulked between the planking strokes.

No more the creation of the upper structures (the wheelhouse and hatches) in the joiners shop. Deck furniture for yachts were made of the finest teak and the interiors lined with mahogany. The craftsmanship of the St Monans carpenters and joiners was without equal. Sadly, the economics of big business ordained that the yard would be closed.

Miller Fifers, the Thomas the Tank Engine of the Seas – By Peter Gregson of Wooden Ships.

I was thinking about the pleasures of simple sailing in keelboats, like the IOD and the West Solent Restricted Class, and then along came TTES, Thomas The Tank Engine of the Seas: it blew all my good intentions away and I did an about turn.

I met Jimmy Miller in his yard at St Monance many years ago. His production of the Miller Fifer range of motor-sailer yachts, based on the big fishing boats that he was building, was inspired. His yachts were not expensive; they looked good and performed well, and kept the yard active in thin times.

This 28ft [8.5m] model came my way last autumn. I looked at her one evening in the dark, thought that she had character and when the owner said that he was going abroad and needed someone to take her on, I could not resist. I returned to see her again in the Hamble a week later with my son Richard, bought the boat and we headed back to Dartmouth.

She was extraordinarily comfortable in the rough seas and I kept imagining what it would have been like in a West Solent keelboat. ‘Terrific!’ said my 25 years old tough and very experienced son, but I wondered!. I have surprised myself at my liking for this little ship which has forced me to consider what sort of sailing I really want to do. I do not much enjoy racing, which I think contradicts all the rules of good seamanship, and I have a companion who hates boats that lean over – have you heard that before; likes the leaving, loves the arriving and the bit in between is generally torture.

The compromise is a motor-sailer where you can keep out the weather but still feel that you are communing with the elements. We can take an afternoon off and chug around the corner or blow gently down wind and still be home in time for tea. We can spend an evening on board, anchored up the river, and in the future we can think about adventures in the French canals.