Colin Grierson, who owned Scoter when it was moored in Tayport alongside Brian Kelly, was a marine artist who also contributed articles and illustrations to Yachts and Yachting in the 60s. He also painted what he euphemistically called Seamaids; these were published as full page illustrations with captions, and might be considered non PC today, although they were and still are very tongue in cheek.

Some of the examples below were copied from the Y&Y archive in the Maritime Museum, with permission of the then owners of the magazine, who also published some to see the reaction, in 2010; the reaction was mostly positive. 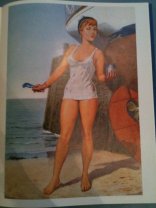 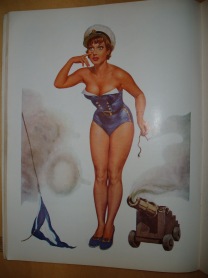 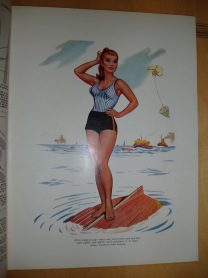 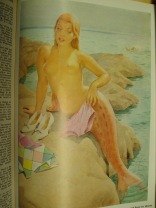 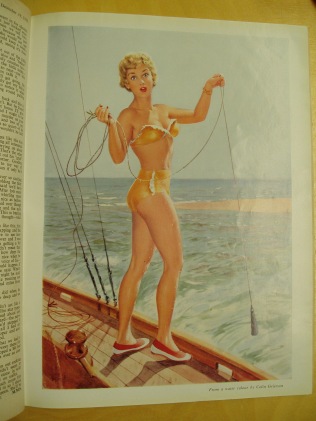 After I bought Idle Duck, I found the 1987 Sales brochure from David East, the broker who arranged her sale by Brian Kelly to Fred Brookes, an artist.

Also, there was a letter from Fred to his partner, with whom he was buying the boat. In the letter there was the comment “that terrible painting must go”; clearly he was an artist of a different genre. I was intrigued, and studied the photos in the brochure, and realised that he was referring to the picture on the forward bulkhead, of a well-endowed and scantily clad young lady sculling a dinghy; slightly unusual I thought.

I discovered that the painter was Colin Grierson, Brian’s friend who owned Scoter, berthed alongside Brian’s previous yacht, Seagrim, in Tayport; the Scoter whose lines Brian had asked Maurice Griffiths to use for Idle Duck. The original painting was retained by Brian, who eventually married Colins wife Audrey, after their respective spouses died. Audrey inherited it and gave it to Douglas, her son, who still has it alongside several other originals by his father in his house – full circle.

Douglas told me that his father was a commercial artist, and painter, who had worked for Yachts & Yachting during the sixties; in those days it had quite a wide readership and covered a range of subjects. Some readers of an earlier generation may remember! Colin painted one of his Mermaids or Seamaids, as he called them – a mermaid with legs – for every issue of the fortnightly magazine – that was reproduced Full Page. Not PC then .

I decided to investigate further and eventually obtained permission from the new owners of Y&Y to copy some of the prints from an archive in the Maritime Museum in Falmouth. Not even being born in the sixties, they had been surprised to find the prints in their inherited archive and had even put several on the Y&Y Facebook; not PC there then, either.. in fact they received approval from their ‘friends’.

We went to stay in Falmouth with our son, for Christmas 2010. I took myself off to the MM, just down the road, and armed with my camera trundled in and asked for the library, wandered in there and asked for the magazine archive, Y&Y in particular. This was when I realized that I had not worked out the best way to ask about Mermaids. I told the librarian that I was “interested in Mermaids, and Seamaids, those are the ones without the fishy tail but with legs.”

“Oh yes”, he said, and I reallsed that I needed to explain.

“My boat was designed on the lines of a boat that was owned by the artist that painted those pictures.”

“Oh Yes”, he said. And I tried to listen for alarm bells. “Can I photograph some of them; I have permission from the Y&Y owners”.

– was he stalling for time. “I can come back if it isn’t convenient”

“Oh no, you’re alright”, he said. Clearly I was going to be supervised, or perhaps he was getting excited. So off we went to the magazine shelves, and I started to pull out the Sixties issues, which I knew was when Colin had worked there.

“I could photocopy them for you if you like”, said the librarian.

Was this a control thing. Ok said I, “can you do it in colour, I think they lose something in black and white”

“we don’t do colour”

“I’ll see what I can do with my camera”

I took quite a few but after two hours or so, I felt I might be pushing my luck, and anyway, one gets bored of too much full colour flesh,  And that is why some of them are obviously from the magazine that I could not fold flat.